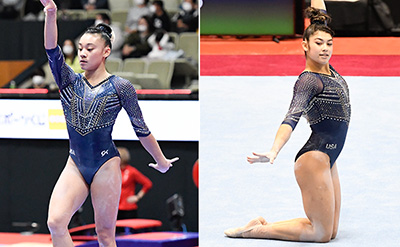 KITAKYUSHU, Japan, October 19, 2021 – Leanne Wong of Overland Park, Kan., and Kayla DiCello of Boyds, Md., qualified for the all-around final and two event finals each at the 2021 Artistic Gymnastics World Championships at the General Gymnasium in Kitakyushu, Japan.

Wong’s 55.749 and DiCello’s 55.700 were the second- and third-highest all-around qualifying scores, earning them spots in the final. The top 24 competitors – with a maximum of two gymnasts per country – advanced to Thursday’s final.

Qualifications also determined who will compete in the individual apparatus finals, which will be held over the weekend. The top eight gymnasts, in accordance with the two-athlete-per-country limit, advanced. Wong (14.000) and DiCello (13.800) were third and fourth on floor exercise, while Wong’s 13.700 and DiCello’s 13.500 on balance beam placed them fourth and seventh, respectively. On uneven bars, DiCello’s 13.900 and Wong’s 13.683 put them in 14th and 15th.

eMjae Frazier of Erial, N.J., and Konnor McClain of Cross Lanes, W.Va., also marked their World Championships debuts Monday. Frazier delivered the ninth-highest floor tally with a 13.166, but she was edged out of eligibility for the event final by teammates DiCello and Wong. Similarly, McClain finished just behind DiCello and Wong on beam, posting a 13.466 for eighth. Frazier also competed on uneven bars, notching a 12.000.