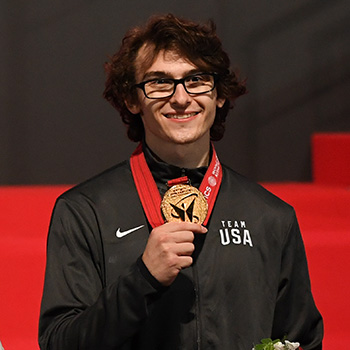 KITAKYUSHU, Japan, October 23, 2021 – Stephen Nedoroscik of Worcester, Mass., made history Saturday at the 2021 Artistic Gymnastics World Championships in Kitakyushu, Japan, earning the U.S. its first pommel horse title. Nedoroscik, who was competing in his first World Championships, finished more than three-tenths ahead of silver medalists Weng Hao of China and Kaya Kazuma of Japan. Teammate Alec Yoder of Indianapolis, Ind., who also qualified to the pommel horse final, was fifth. Nedoroscik is only the third American to medal on pommel horse at a World Championships, joining Kurt Thomas (silver, 1979) and Alexander Artemev (bronze, 2006).

During Wednesday’s qualifications, Nedoroscik advanced to the pommel horse final in the second position with a 15.366, just ahead of Yoder who qualified in third with a 15.300. On Saturday, Nedoroscik’s 15.266 was enough to secure him the gold medal. Hao and Kazuma each finished with a 14.900. Because both gymnasts earned the same difficulty and execution scores, the tie for the second position stood. Yoder posted a 14.766 – the same score as Kazakhstan’s Nariman Kurbanov – but was edged out of fourth place by the tie break.

Throughout the evening, World champions were also crowned on men’s floor exercise and still rings and women’s uneven bars and vault. Italy’s Nicola Bartolini took the top spot on floor with a 14.800, while China’s Lan Xingyu topped the field on rings with a 15.200. Olympic vault champion Rebeca Andrade of Brazil reaffirmed her dominance on the apparatus, claiming the gold medal with a 14.966. China’s Wei Xiaoyuan led the way on uneven bars with a 14.733.

The Artistic Gymnastics World Championships wrap Sunday with the remaining five event finals. On the men’s side, U.S. gymnasts Brody Malone of Belfast, Tenn., and Yul Moldauer of Wellington, Colo., are set to compete in the horizontal bar and parallel bars finals, respectively. World all-around silver medalist Leanne Wong of Overland Park, Kan., and bronze medalist Kayla DiCello of Boyds, Md., will look to add to their medal collections. Both have qualified to the balance beam and floor exercise finals.