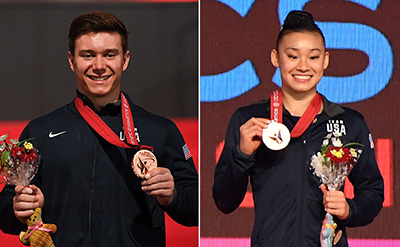 KITAKYUSHU, Japan, October 24, 2021 – Brody Malone of Belfast, Tenn., captured his first World medal Sunday at Kitakyushu’s General Gymnasium, while Leanne Wong of Overland Park, Kan., picked up her second medal of the 2021 Artistic Gymnastics World Championships on the event’s final day. In total, the U.S. was represented in four of five apparatus finals on the night.

Malone delivered a 14.966 on horizontal bar to claim bronze in a high-flying final that saw two gymnasts break the 15.000 mark. The gold medal ultimately went to China’s Hu Xuwei (15.166) who edged Olympic high bar champion Hashimoto Daiki (15.066) of Japan for the crown.

Earlier in the night, Wong narrowly missed the podium in the balance beam final. Her 13.333 placed her fourth, while DiCello was eighth with an 11.866. Five of nine competitors came off of the apparatus, adding to the drama inside the stadium, as two Japanese gymnasts ground out medal-worthy performances in front of an appreciative home crowd. Ashikawa Urara took the top prize with a 14.100, while teammate Mai was third with a 13.733. Germany’s Pauline Schaefer-Betz (13.800) claimed silver.

Yul Moldauer of Wellington, Colo., was also in action. The former Sooner posted his highest score of the competition on parallel bars, dropping an even 15.000 en route to a fifth-place finish. Xuwei, who finished the night with two World titles, earned gold with a 15.466. Shi Cong, also of China, was third with a 15.066, while Carlos Edriel Yulo of the Philippines finished in second with a 15.300.

Yulo claimed the vault title during the first apparatus final of the night, averaging a 14.916 across two vaults. He outpaced Japan’s Yonekura Hidenobu (14.866) and Israel’s Andrey Medvedev (14.649) who were second and third, respectively.

The 2021 Rhythmic Gymnastics World Championships, which are being held in Kitakyushu in conjunction with the artistic championships, kick off Wednesday. The U.S. will be represented by three individual gymnasts and a group who will look to build on the success of the American contingent over the last week in Japan.