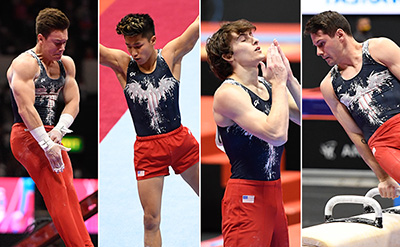 Yul Moldauer of Wellington, Colorado, advanced to the men’s all-around final Wednesday, while Kayla DiCello of Boyds, Md., and Leanne Wong of Overland Park, Kan., qualified for the women’s all-around final earlier in the week. Wong (55.749) posted the second-highest all-around score of the opening round, finishing just ahead of DiCello (55.700) in the standings. Moldauer fought through a challenging pommel horse performance en route to an 81.064 and a place in Friday’s final.

The top eight gymnasts on each apparatus – with a maximum of two athletes per country – also earned spots in the men’s and women’s individual event finals, which will take place Saturday and Sunday. Through their performances on Monday, DiCello and Wong secured spots in the women’s balance beam and floor exercise finals. They will be joined by Brody Malone of Belfast, Tenn., Moldauer, Stephen Nedoroscik of Worcester, Mass., and Alec Yoder of Indianapolis, Ind.

Moldauer’s 14.866 on parallel bars qualified him in the fifth position, while Malone – a fellow 2020 Olympian – advanced to the horizontal bar final in fourth with a 14.366. Pommel horse specialists Nedoroscik and Yoder delivered the apparatus’ second- and third-highest qualification scores, garnering marks of 15.366 and 15.300, respectively.

World bronze medalist Donnell Whittenburg of Baltimore, Md., was edged out of the vault final, finishing in 12th with a 14.333. Whittenburg also competed on floor exercise where he earned a 13.866. Still rings specialist Alex Diab of Glen Ellyn, Ill., posted a 13.366 in his first World Championships appearance.

Olympic Channel: Home of Team USA will air the men’s and women’s all-around and event finals live, with same-day delayed coverage of the all-around competitions on NBCSN. Additional World Championships coverage set to air October 24 on NBC and stream on Peacock at 1:30 p.m. ET.